In 1912 Gerald Francis Allen purchased the property then known as Heverlee. He renamed the property Mahratta after a Bombala sheep station in southern NSW where his grandfather was overseer. The word is derived from two Sanskrit words Maha ratta, ‘The Great Kingdom’.

Under the direction of architect Arthur Palin, Mr Allen made extensions and upgraded the substantial Federation home. The mansion was noted for its cedar staircase and copper ceiling in the billiard room. In 1930 Mr Allen sold Mahratta to Sir James Joynton Smith who was a member of the Legislative Council, Lord Mayor of Sydney and owner of the Carrington Hotel in Katoomba. In 1939 Sir James sold Mahratta to Caragabal Pastoral Co. Pty Limited, a company associated with the family of Mr Thomas Arthur Field. Mr Field was a well-known meat merchant and grazier, who with his brothers, had inherited their father’s retail and wholesale butchering business. As well as developing the company’s wholesale and export trade they purchased pastoral properties throughout eastern Australia.

In 1940 Mr Field decided to demolish the existing residence and commissioned Douglas S Agnew to design the present building (not the Abercrombie wing) and it was completed in 1941. Designed in the Art Deco style accounts for the theatrical charm and majesty of the house, no less exemplified than in the experience of the entry and main hall with its curved, scagliola finished staircase, curved wall and pilasters.

It is acknowledged as one of the finest Art Deco mansions in Sydney even though it was completed well after the Art Deco period ended. Mr Field died in 1944 but his widow Jessie, continued to live in Mahratta until 1960.
In 1960 the property was acquired by the Bank of New South Wales (now Westpac Banking Corporation) as a Staff Training facility and in 1964 the new three storey Abercrombie wing was added on the western side for residential purposes. Though the bricks are closely matched, there was no attempt to replicate the classic art deco forms of the rest of the building.

The School of Practical Philosophy acquired the property in 1990 as a venue to conduct public courses in practical philosophy. It also holds events and residential retreats. From that time the property has been rejuvenated and is maintained to its high standard by students within the School who recognize the historical significance of the property.
Mahratta is listed on the State Heritage Register 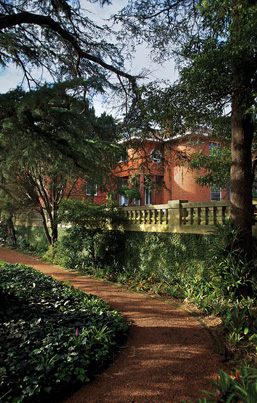 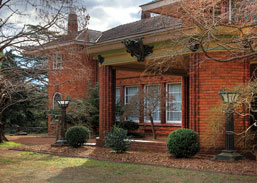